Six days from now Jimmer will be celebrating his 28th birthday, five days from now his team will tip off Shanghai’s first CBA play-off game in years, and four days from now, Jimmer’s wife Whitney is due to give birth to their first born child back in Denver, Colorado. I’d say that these very special life events could be the cause of Jimmer being on a high. So I guess it was only right that he lived up to that high by putting up a career high, and not just a professional career high – a lifetime career high!

In what turned out to be the best basketball game I have seen all year at any level, my little brother did something historic. He finished the exhilarating, double overtime, barnburner of a battle in a fashion that would make his most faithful fans have joyful flashbacks of the Jimmermania days. . . and then some. His greatest scoring performance in his college career came against New Mexico when he dropped 52 in the Mountain West Conference tournament. In his high school and AAU years I recall a lot of high 40’s, a couple 50’s, and if I’m correct even a 60-point performance. Although all of those magnetic showings were beyond impressive, they all paled in comparison to what Jimmer just did Sunday night in the heart of China (Sunday morning here in the states). Jimmer recorded a personal, lifetime best, 73 points in game that can now be considered an instant classic in the ranks of the CBA. It was an inspiring affair. It was a special moment that will definitely never be forgotten. It was a back and forth slugfest where both the Sharks and the opposing Lions played a lights out game. The kind of game where you might find yourself breathing heavy just from watching the exhausted players fight through the fatigue of a game that didn’t ever want to end. Unfortunately for the Sharks they were edged out in the end, but regardless of the outcome, it was an incredible, event played out in front of an ultra animated crowd, who can be credited with providing an absolutely intoxicating atmosphere.

Now this is it. The regular season is officially over. All the early morning training sessions, unforgiving road trips, and season long sacrifices have lead to this. The CBA Play-offs! This Friday the long awaited competition will kick off with a bang in the nation of China. Will the Sharks do what they set out 5 months ago to do? Will Jimmer be able to ride out the momentum of his historic 73-point night? I know I for one, cannot wait to find out! Stay tuned for updates on the Shanghai Sharks as their play-off ride begins! 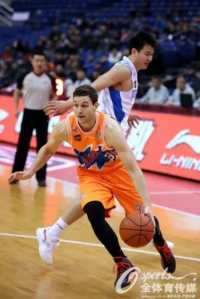 If the phrase, “time flies when you’re having fun,” has any merit, and I believe it does, then Jimmer’s trip home to Denver over Chinese New Year break must have felt like it was over within less than a nano second. I mean let’s face it, when you’re dealing with a 13 hour flight one way, the amount of hours you spend relaxing on your four day trip is literally almost equivalent to the amount of hours you spend in the air. Some might say that with that kind of flight to vacation time ratio, the long haul across the planet might not have even been worth the jet lag for Jimmer. However, I guess anyone who would say that, surely didn’t take into account exactly what Jimmer was going home for.

The drastic ups and downs of Jimmer’s roller coaster of a career could make the rides at Six Flags look like a slide at Chuck E. Cheese. The highs and lows can be overwhelming, and at times be very difficult to put into proper perspective. Fortunately for Jimmer, throughout it all, there has always been one crucial constant. Whether he was lighting it up at the Garden, sitting at the end of the bench in New Orleans, gazing out the window of his hotel room after a D League back to back in Des Moines, with 30 below winds whipping across the cornfields outside, or he was clear across the Pacific Ocean, hitting game winning free throws in Singapore in front of a crowd full of ecstatic non-English speaking fans, he’s always had that one constant to help him stay grounded. That one constant, is the exact thing that he was beyond thrilled to hop on a 13 hour flight last week to go see…. even if it was only for a short while. That one constant, is his family. His wife Whitney who he adores, and who is now carrying their first child due to be born in less than a month, and his picture perfect Golden Retriever named George, who lights up like a stadium every time Jimmer returns home. His family was there before the fame, during the fame, and will still be there when the fame is long gone. They’ve been there through his most challenging moments, to take on his struggles with him, and help lift him up when the pitfalls of an unforgiving spotlight tried to keep him down. They were there to celebrate with him, when the thrills of success were thrust upon him in abundance. They were there to help him make some of the toughest decisions he’s ever had to make in his life (well, maybe George had no part in the decision making process, but certainly Whitney). Those tough decisions include the decision to make a heartfelt sacrifice to leave his family behind and travel across the world to begin a new, exciting, but somewhat scary chapter of his career, in a country that he had never been to, and really knew nothing about. They were there through it all, and are there at this very moment, as his career in China begins to soar to heights we never knew would be possible on another continent.  Knowing that they are there. . . there at home, waiting for him to return after months of being away. . . there on those days when it seems like everything on the court is going against him. . . there when a sports reporter paints  a picture of negativity on the canvas of his career, there when he puts up 51 and leads his team to a big victory. . . but even more importantly, there when everything goes quiet, when the spotlight is no longer targeting his every step, when the critics no longer have him on their radar, and the fans have moved on to the next big thing. Those are the moments when Jimmer realizes more than ever, that he already has everything he needs. His wife, and his family…that is the one constant. They are what made 26 total hours on a plane for only a four day stay, way beyond worth it for Jimmer. They are always there, and that’s what keeps him grounded, and that’s what keeps him happy. . . no matter what.

…Now for a quick update on the Sharks. Coming off of the Chinese New Year Break, the Sharks were able to fight off a rusty start, to come back after being down 14 points to Qingdao, picking up another big victory and keeping their undefeated home streak alive. Jimmer lead the team with 37. Now the Sharks prepare for the last couple weeks of the regular season as they fight tooth and nail to enter the playoff picture as the number one seed. With some red hot teams out there neck and neck with the Sharks, such as Carlos Boozer and the Guangdong Southern Tigers, hanging on to that one seed will certainly be a challenge – but one I believe that Shanghai is up for! Stay tuned to see how the rest of this exciting regular season unfolds, as the CBA gears up for an intense, competitive playoff run!

Here are some pictures and a video of some of the beautiful sites in Shanghai.

This is why he traveled so far for only 4 days at home.

and baby makes 3… but 4 when you count George 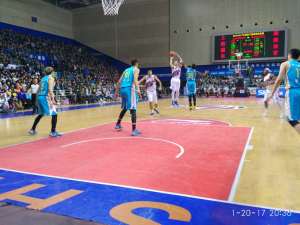 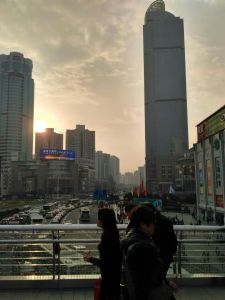 Beautiful sunset…they are 12 hours ahead of us normally but with the time change it’s 13 hours ahead now.