Well I hope you all saw the “Outside the Lines” segment on Jimmer.  I noticed that there is a 5 minute preview version on some of the social media sites, but that’s not the whole thing.  The finished video was a little over 20 minutes.  I know a lot of you could only find the 5 minute one but the longer version can be released 21 days after the airing of it on TV.  So I will let everyone know when that happens.

Kudos to ESPN’s “Outside the Lines” crew.  They did a fantastic job and we all loved it.  It definitely captured the very essence of Jimmer.  He’s a hard working, unassuming type kid, (well I call him a kid because I’m his mother) that loves God, loves his family, including his dog George, loves playing basketball and other sports, and loves hanging out with family and friends. Now he has another little one to hang out with….their little girl. It’s as simple as that. What you see is what you get with Jimmer.  He’s never given up on his dream of playing in the NBA (which he did) and to continue to play professional basketball.  There are two personality traits that Jimmer has which have gotten him to where he is, and it’s persistence and perseverance. His wife might call it stubbornness.  He went through more than anyone knows during those first few years in the NBA, never once complaining to any of us, but kept his head up, worked hard and kept positive.  He has never doubted his abilities.  I know that he must have felt great frustration and disappointment…. but he kept going.  Now he has captured a whole new HUGE audience that appreciates his talent for basketball and loves him for who he is….and he loves them in return.   So what I would say to anyone that is getting close to their dreams of (whatever), and you feel like giving up….DON’T!!!… because you never know what is on the other side of that frustration.

So to finish up Jimmer’s experience in China for this year, I would like to talk about the making of the commercial that he did for the sporting good company called 361.  My husband happened to be there watching the whole process so I can post some of the pictures and video that he took. Kind of blurry but, hey, he had just graduated from a flip phone to a smart phone and it was all new to him…. so I’ll cut him some slack.  You did good Al.

He said they were there in a cold gym for about 9 hours.  You can see by the pictures that no one took their heavy coats off except for Jimmer when they had to do a scene.  They were very conscious of making sure Jimmer was warm and comfortable by putting a heater by him when he sat down and made sure he had a coat to wear at all times.   Al also said that they had a lot of good food for them to eat during their breaks so they certainly didn’t go hungry.  Very kind crew they were.

As I said last time when I talked about filming here at our home, it takes so much time for just a few seconds of footage, and it was the same here.  They worked very hard all day and I think the actual commercial is about 15 seconds long…if that.  Al said it was really interesting to see how it was made though.  There were about 50-75 people there, some busy with their specific jobs and some just watching. At the end you will see a bunch of sparkling confetti blowing up behind Jimmer.   There was one guy that had that job.  He had a PVC pipe and filled it full of the confetti.  Obviously he put something in the pipe that would shoot it out behind Jimmer like a small cannon to disperse it throughout the air.

Also what I thought was interesting was that they had a “stand in” for Jimmer so that he wouldn’t have to stand all day while they got the right camera angles and lighting and whatever.  They actually hired someone to do that!!!…and I think they paid him pretty good money for it.  Al got a chance to talk to the guy while he wasn’t busy being the stand in.  He said he was from Norway or Sweden or some place like that.  He was going to school over there in China and he would pick up odd jobs to make some money.  He was an interesting guy with yet another accent (this time Norwegian) in the mix.  They wanted someone of similar height, build and coloring so they could get everything right concerning Jimmer’s scenes.  I’ll post a picture of him.  Nice, happy guy Al said.

I got a kick out of how they all scooted across the room together to film Jimmer as he was dribbling the ball.  It was soon after Jimmer had slightly injured his foot and it must have been a little tender for him to do those moves, but he was a trooper. It got done.  It was an interesting and fun day for Al and Jimmer….but also a tiring one.  It takes a lot of patience and a lot of waiting around,  but it’s worth it in the end.  They have a great commercial out now and it is playing over in China for 361.

A lot of people have asked about Jimmer’s signature shoe and when it’s coming out.  He says that it won’t be out until next season and they are trying for it to be available in the USA somewhere but not at all sure about that.  We will let everyone know when we find out.  Maybe they will be available for Christmas this year.  That would be nice.

Ok that’s it for today….thanks for stopping by.  I’ll post some pictures, some video and the completed commercial at the bottom.  Those of you that saw the 20 minute version of ‘Outside the Lines” yesterday saw the commercial already.  These “behind the scenes” videos below show you that everything like this on TV seems so glamorous because the final product is so polished and perfect, but the work that goes into it, and the reality of it is not quite so glamorous.  Check it out.

was on TV when Al was in China 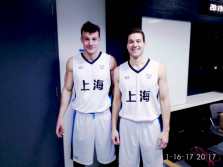 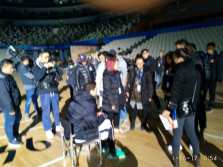 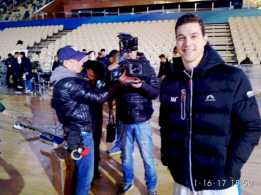 one of the nice coats from 361