The other day I was looking through some old pictures and old memories that I had stored away and among  them was a card that was written by my father.  It was an anniversary card to my husband and I. He must have sent some money in it because at the end he said to go out and have a nice dinner on him.

My mother died in 1999 so it must have been written somewhere in the 9 years that he lived after her passing. He wrote a very sentimental note to us about treasuring every moment that we had together.  Looking back I realize that as he wrote it, he must have been suffering his own personal pain of loosing his wife (my mother) of 57 years.  As he wrote those words, I’m sure he was thinking how fast time goes by and that he never thought that he would be sitting there without her. He always said to me “I always thought that I would go first.”  So besides the anguish that he felt of loosing his lifelong partner, he had anxiety about living on his own.

It was with a lot of sadness and concern that my siblings and I watched him struggle to come to terms with life without her.  I must say though, even at his age,  being left alone was a growing experience for him because all of a sudden he had to do everything that my mother used to do for him.   We were proud of him as he learned and handled the day to day responsibilities that my mother always took care of for them.  He was always too busy working outside the home to even notice all the little things that had to be done in a household. Little by little he managed to carve out a life and a routine for himself.  Not saying that he didn’t miss and think about my mother everyday, but the pain of it all lessened as time went on.  Of course all of his children pitched in to help in any way that we could and as he got older and more forgetful, it became more of a worry to us. I think he may have banged into a few different things in Whitehall with his big Cadillac, that we weren’t aware of……yes the car situation becomes an issue eventually in every family with elderly parents to monitor. I think our kids may have to wrestle the keys out of my husband’s hands.  That’s ok, you may be able to take him by then.   Ha ha

When I saw the writing of my father, a flood of emotions came over me. Wow he really was here. He was our father and we had a life with him. After so many years when your parents have passed, the memories fade and it almost seems like a dream. You remember bits and pieces and certain times you had with them, maybe something they said or did…mostly good, and maybe some not so good, but then you think, no matter what, they loved you, sacrificed for you, and did their best.

Some children don’t have the blessing of a father in their home but I have seen many uncles, grandfathers, older brothers, or good responsible male friends step up to the plate and be good role models for the children. It goes without saying that the mother in the home is without a doubt one of the most powerful forces and examples to the children…but I am just talking about fathers today.

My father was a printer….not a cursive writer and it was unique to him. It’s funny because my son Jimmer prints his notes also.  He signs his name in cursive but other than that, it’s all printed.  The inclination to print must have been hereditary in some way because I know Jimmer never really saw his grandfather print.  It is just Jimmer’s style.

My father had a long list of accomplishments in his life, father of 6 children, good athlete, served in both the Army Air Corp, US Navy, teacher, iron worker in the summers, director of athletics, high school principal and one of his most notable and enjoyable positions was that of a high school coach.  Until the day he died, his athletes affectionately called him “Coach.”  Although he coached every sport that was offered in our small school, his main stomping ground was down at the “Playground” in Whitehall.  In fact, I remember helping to hand out the football uniforms every year along with my brothers and I proudly got in all of the team pictures taken on the field each year.  Such fond memories of that field we all have.  It was named “The Clint Taft Memorial Field.”  “Legacy of a Coach”  He would have been so happy to see the monumental stone that was erected for him.  My Mom would have loved it too.

Granddaughter Lindsay and Grandson TJ. Jimmer was away at college at this time.

Sports was something that sustained him all of the years that he was on his own after my mother died.  He would scour the paper to see what sporting event he could attend that day. He was fiercely loyal to his hometown teams of Whitehall, NY.  My brother, Lee, was a football coach in a town about 45 minutes away from Whitehall.  Dad made sure he drove up to all of his games, to not only enjoy them, but also to support him.  As I talked about, it was a time of Dad’s life when he probably shouldn’t have been driving, but he did it anyways because the desire to see his son’s football games overshadowed everything else. He loved it and it was something for him to look forward to every week. I accompanied him to all of those games and it was a chance for us to spend hours of good quality time together.  Lee was such a good coach and I know Dad was proud of him…. and maybe relived his coaching days through him. Actually my brother Jerry was a coach for a short amount of time in Luzerne when they had 8 man football.  Fun to watch him too.  He was also a very enthusiastic and knowledgeable coach. We all never missed those games either…it was always a family affair if we were living locally. My brother Jimmy was a great basketball coach in Connecticut for years but it was too far away to see the game regularly but if it was possible, my father would have been there at every game. Me too!

Sports was in his blood. He played it, he coached it, and he watched it until the day he died. He also attended all of my children’s games (his grandchildren) that were at least a half hour of driving away.   Both my mother and father would attend my son Tj’s games, Lindsay’s games, and Jimmer’s little league games if it was possible.  For little league, you could see them sitting behind the backstop in their fold up chairs.  I still can remember the feeling I had, after my mother’s passing, when I looked behind the backstop at the game and there he was…. sitting alone without my mother until Al and I went to join him. Even if we weren’t there I know he would have stayed to enjoy the game. Took some getting used to seeing him come in the ball park alone, but it made me feel good that he still enjoyed every minute of it.  After all, it was competition and it didn’t matter if it was tiddly winks, he would enjoy the process of the back and forth effort to win.

He was a wonderful man, father and “Gramps” to us all.  My son Tj called him the king of the one liners.  He was kind, compassionate, competitive, funny, a kidder, and of all that he had going on in his life, one of his greatest joys was being a father of 6 children and grandfather of 14 grandchildren. He was an only child himself, so a big family was something that he never had, but wished for, when he was young.  He had that large family eventually with us 3 girls and 3 boys.

So Father’s day was last weekend. I honored the great fathers in my life… my husband, one of my sons who is a father now, my brothers, my son-in-law, my children’s friends who are now fathers, and all in our extended families that are fathers, but my thoughts gravitated to my own father, who I loved and lost in this life but have no doubt that I will be reunited with him one day.  It’s the plan and God keeps his promises to us.

So I hope everyone enjoyed their special Father’s day.  You are all an integral and special part of your children’s lives. You only get one chance at this parenthood thing. Even though it’s inevitable that you will look back with some regrets, make a conscious effort to give it your very best shot.  I can promise you that giving your children time and attention will be the greatest accomplishment in your life.  Never underestimate the importance of fathers or father figures in a child’s life.

Those 18 years or so you have with them go by faster than you can imagine.

Thanks for stopping by.

PS…I wrote this in green because it was his favorite color.  It’s funny that Jimmer’s uniform colors are now green.   For you Dad. Thinking of you.  Happy Birthday… 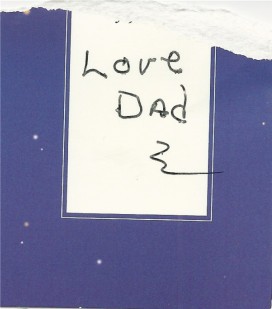 PS  This picture of his writing was the last that I got from him.  You can see that it was getting a little wobbly from age… but his heart was all in it for me.