This past week was a pretty crazy week for Jimmer. After returning home from All-Star weekend, he immediately took part in a ribbon cutting ceremony for one of the 361 stores in Shanghai. The event went really well and a large, eager crowd turned out to catch a glimpse of Jimmer in his new 361 gear.

After his successful appearance, Jimmer and the Sharks were able to start off the second half of their season with a bang, avenging a prior loss with a dominating performance. Jimmer was able to record a game high 37 points in the match up as his team cruised to a 30 point victory!

Unfortunately Jimmer’s next game wouldn’t turn out as well. Early in the 2nd quarter he came up hobbling from an injury to his foot. He had to sit out the remainder of the game and has been sidelined since. The good news is that his team was able to rally together and pull out two big wins without him in the line-up. Also to add to that good news, Jimmer said his foot is feeling better every day and he feels that there is a strong possibility he will be back on the court by next week! We will keep you up to date on his progress.

Lastly, today Jimmer’s twitter account was hacked. I’m sure some of you might have seen his tweets today and were wondering what was going on, so I just wanted to make this announcement so people would be aware of the problem. His twitter is now back to normal with Jimmer once again in control. Thanks to all of his supporters who gave us the heads up on this unfortunate hacking, we appreciate you all looking out!

Today Jimmer is doing his second photo shoot for 361, where he will also be picking out designs for a new line of Jimmer clothing which will be coming out this fall! Exciting stuff! We will be sure to keep you all updated on the progress with the new line. Stay tuned for more updates and pictures coming soon! Here are some good behind the scenes shots and video of his ribbon cutting.

start of the photo shoot 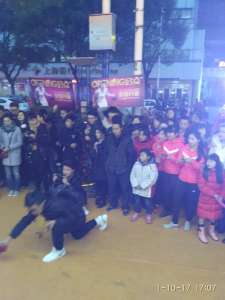 poster of Jimmer in the back

Jimmer appeared on China TV for preview of 361 gear